The Bushnell Voyager Reflector Telescope is an attempt at blending upscale and budget with old and new tech. The results are mixed. I can appreciate what they are trying to do by combining a standard budget friendly telescope aimed at beginners and trying to add in enough extras to make the package more appealing, however, the overall quality just misses the mark.

The accessories are there. The design vision is there. The problem is, the visual quality and ease of use just aren’t. For a telescope aimed at beginners, it is not very intuiative to get started. 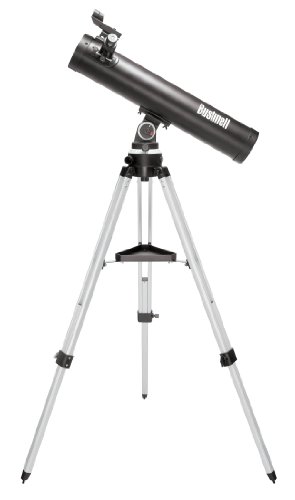 If you want to try and take a flyer on a newer brand with a focus on added value, you might be able to find something here to like, especially on a budget. Overall, I would say your money is best spent elsewhere.

At 76mm the aperture of the Bushnell Voyager Reflector Telescope isn’t bad. That is a standard size for a telescope at this price and for this kind of audience. It is a basic Newtonian reflector that aims to give you the ease of use and image quality of similar Newtonian reflectors.

The problem is, the image quality just isn’t all that good. Images rarely looked sharp and focusing was a chore. Even when I had everything lined up properly, focused where I wanted it and stable the images just weren’t as good as similar models. I’m not sure if this is an issue with the included eyepieces or something with the quality of the mirrors or some kind of collimation or focusing quirk that I just wasn’t understanding.

Once everything was aligned the way I wanted it, the images weren’t bad necessarily, they just weren’t great. Up until I fussed with the telescope for a while, the images were bad and they never really became good.

Another issue could be the short focal length of this telescope. With a focal ratio of f/9.2, this telescope is giving fairly narrow views compared to some similar models.

For the complete beginner, they might not notice the drop in optical quality. However, the difficulty level that it took to get any images at all to appear in a viewable way might turn off the complete novice to begin with.

Bushnell boasts that they have included an “illuminated smart mount” which is supposed to “point the way” to your favorite objects. It sounds good on the webpage but the problem is, it just doesn’t work that well.

Their system works off of an LCD handset which comes included that is supposed to help point you to planets and constellations. Without a goto mount or any sort of other computerized features, this only serves to try and do a job that much better software has been doing for years. The screen only displays very basic information via digits and letters.

There is no reason why you would use this handset over say any of the dozens of high-quality night sky apps you can get on your phone or Starry Night, an easy to obtain a piece of software that helps map the night sky for you. With modern apps and programs, you get rich visuals, advice, a full view of the sky, a list of nearby objects, and so on.

There are applications for your smartphone designed to guide you to your favorite night sky objects. There are books, and there are charts, there are a dozen other things better than the included handset that do the same job. This feature truly adds nothing to this telescope.

If it had a large database of obscure objects, an automatic positioning system to align your telescope for you or an automatic mount which found and tracked objects on its own, then it would be a different story. Instead, they have included this handset in order to try and trick you into thinking you are getting these features when you are not.

Unlike the hastily included “smart” technology, the Bushnell Voyager Reflector Telescope does have some solid upgrades to go along with it. Instead of a single eyepiece, they have included three (4mm, 8mm, 12.5mm). It comes with a tripod and mount. It includes an LED red dot finderscope. A 2x Barlow scope is featured in an image on their website but I never received one, so that is up for debate.

I don’t usually say this but I really like the mount on this telescope. It is well marked with positioning dials on both axes. This makes doing fine tuned adjustments easy to do. The mount is smooth and looks good. Most of the time, I don’t pay attention to the mount but this one stood out.

They clearly made the mount readily marked to try and play into their included handset. Don’t worry, it still works with your phone app too. Either way, it is a nice touch.

The rest of the accessories are solid. The eyepieces work well. The tripod is a little wobbly but overall, better than some that I have encountered out there. The LED red dot sight is very nice. It works well and looks sharp.

All in all, they tried their best to include solid upgrades in this department and they almost rescue this telescope.

I’ve said it before and I’ll say it again. Accessories and upgrades are nice but if the optical tube itself is bad, it doesn’t matter. Instead of adding in extra eyepieces, a near worthless “smart” handset and a guided audio tour of the sky they should have worked to deliver a better optical product. Without the optics, none of this stuff is all that impressive.

If you are in the market for a telescope in this price range there are far better options out there. You can get a great refractor from Celestron or a similarly sized reflector from Orion. Both of which are worlds better than this outfit.

If you still want the Bushnell Astronomical Voyager telescope, check out the price at Amazon.