SLT stands for Star Locating Telescope. With the NexStar 90SLT Celestron has attempted to create a computerized telescope on the lower end of the scale in terms of price and specification. Unfortunately, this is a rare instance in which Celestron misses the mark.

The NexStar 90SLT is a small Maksutov-Cassegrain telescope that comes equipped with Celestron’s technological offerings. Normally, I would praise a move to add high end upgrades to a consumer grade telescope but in this case, the tech and the telescope just do not gel properly.

The Celestron NexStar 90SLT Telescope lures unsuspecting people in with its promise of large databases and amazing technology but leaves them frustrated and wondering if they had made the right decision. This telescope is simply far too small to make use of all of the technology it advertises. 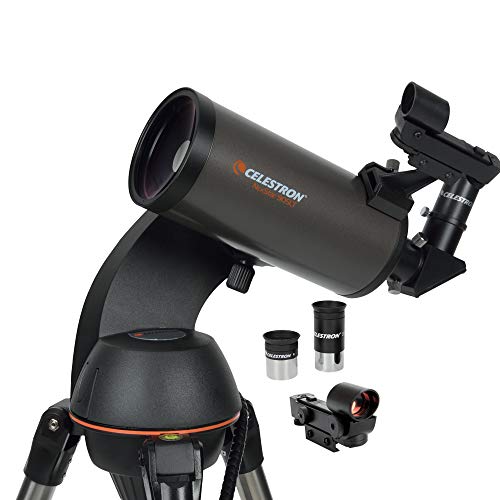 This is just a combination that does not work very well. I can’t blame Celestron for trying to push the envelope with their NexStar line, which is diverse and generally very good but they can’t all be winners.

Optics Are Good But…

Overall, if you know what to expect, these optics are not bad. As a small Maksutov-Cassegrain telescope, it delivers what you expect it to. That is highly focused views of nearby space that produce high quality images of well known sights.

There is nothing wrong with that. There is a large market for focused telescopes with high focal ratios that excel on spotting objects in the solar system and near space. However, these telescopes are usually much cheaper and easier to use than the NexStar 90SLT.

Being the smallest telescope in the NexStar family in terms of aperture and overall dimensions, this telescope has an extremely high focal ratio of f/14. This means it is going to only truly be good at looking at single bright objects. It is not going to be able to scan the sky for deep space objects.

On its own, this telescope could be a great, small, durable grab-and-go telescope that would fit in nicely at a campout or BBQ. The problem is that it is not what Celestron has pegged it as.

…There Is a Big Disconnect

The combination of low light gathering capability and a high focal ratio means that the SkyAlign technology, the database, and the goto mount are going to be extremely undervalued here. This telescope simply does not have the chops to utilize the full functionality of these features.

There is no point in slapping a 40,000 object database on a Maksutov-Cassegrain telescope with a focal ratio of f/14. The telescope simply cannot see even a fraction of the objects included in the database with any quality at all.

I would hazard to say that you really don’t need any sort of computerized features when looking at Venus and the moon and other familiar objects. The computerized features are best for people who want to try and spot a nebula you have never heard of before but the 90SLT won’t be able to show you a distant nebula.

The result are features that look good on paper but in reality, will be underused. The worst case scenario, one I have seen brought up quite a bit when researching this particular scope, is that the features actually cause frustration and confusion rather than easing those things.

Every NexStar telescope that includes SkyAlign has some people who have issues with getting it to work. It’s a technical piece of technology and those things are bound to happen. In the case of the 90SLT, I have seen vastly more complaints about SkyAlign in conjunction with this model than any others.

So is SkyAlign bad?

I do not think SkyAlign is any different in this model. The program, to my knowledge, is the same across all of their telescopes. The problem here is with the 90SLT’s optical tube itself. I don’t think this telescope is able to visualize, focus on or quantify the images of the bright objects required for SkyAlign to work.

When this telescope does work, it does everything it says it can. You pick an object from the list and the scope moves into position to spot it. However, with the 90SLT, when you go to look at the object in question, it usually shows up blurry, small or both. It just doesn’t have the power to really show you things you don’t already know about off the top of your head.

I think the problems with SkyAlign and the 90SLT are a perfect example of why this telescope’s features just don’t work. The telescope is not good enough to get the program to work as intended leaving people frustrated thinking that there is something wrong with the technology. I think the tech is fine, I think the telescope is just the wrong design choice to include it on.

Like all of the computerized telescopes out there, this one includes a manual control option. So if you just don’t use the technology is the telescope okay? The answer is yes, but. Without the computerized features, the price is simply too high to justify a telescope of this caliber.

Celestron’s telescope itself is fine. It works as intended. A short barrel Maksutov-Cassegrain is not going to be a light bucket, it is not going to be able to peer deep into space. It is going to give you excellent views of Saturn’s rings or the dry sea beds on the moon.

You can get similar Maksutov-Cassegrains like the Celestron Nextar 4SE or solid refractor telescopes for half the price of this model or less if you really want to. If those backyard views of the solar system are what you crave, you can find dozens of quality telescopes out there for much less money.

Taking all of that away leaves you with a telescope that is admittedly compact, light, easy to take with you and set up. The manual control works as intended. It would be a great tag-along telescope for looking at the moon. Just not at this price.

If this telescope was jam packed with extra goodies or a large assortment of valuable attachments that offset the high cost at all, I would be more likely to lean towards giving it a maybe. But this telescope has nothing of the sort.

There are many other telescopes, especially high focal ratio refractors, that come with a ton of attachments to really diversify your scope. Not only are Maksutov-Cassegrains not the best telescopes for accessories in general but Celestron adds nothing of value with their accessory kit.

They offer two eyepieces and a finderscope, plus a free copy of Starry Night which all telescopes feature nowadays, and that is it. There are no filters, no Barlow lenses, no focusers. Nothing but the bare minimum.

The worst part is, even if you do want to try and use the full motorized setup you will have to provide it with 8 AA batteries which will not last very long during use. There are other accessories that could have been useful here. Like a focuser to try and fix the problem with many objects being difficult to focus or an upgraded power source to avoid churning through AA batteries all night. Celestron offers neither.

In a rarity, I am going to give this telescope a hard pass. The only people who might might benefit from this telescope are people who want to take their telescope out into nature with them regularly who are able to pack 100 AA batteries and find it enjoyable to try and get the most out of the database with an underpowered telescope. I am sure that is someone.

This is one mashup that just doesn’t work. The Celestron 90SLT Telescope just is not powerful enough or designed to utilize the features that they have tried to slap onto an otherwise decent Maksutov-Cassegrain scope. The poor pairing of the telescope and the technology leads to more confusion, trouble, and frustration than it is worth. Save yourself the trouble, get a different NexStar telescope, or get a fully manual telescope with similar specs. I know you will be happier with either choice.