In a natural evolution of their SkyAlign technology, Celestron now has StarSense. This is a new set of technological upgrades that takes the platform from a database to your smartphone. They have chosen a large aperture reflector to attach this new tech package to which has created a powerful and versatile astronomy tool.

The Celestron StarSense Explorer DX 130AZ Smart Reflector Telescope is a solid reflector telescope with the next generation of Celestron technology packed into it. This is a direct evolution to the NexStar 130SLT which we reviewed favorably.

If you want to jump into the next generation of smart telescopes, this will give you the power and innovation you crave. However, being so new, the technology is not without a few bugs of its own. 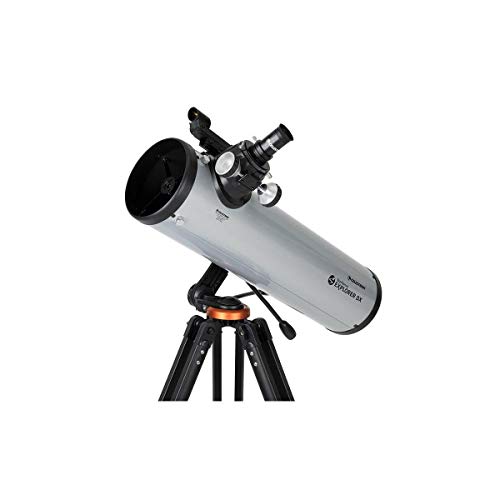 New technology aside, we can still appreciate a well made large aperture reflector telescope. The Celestron StarSense Explorer DX 130AZ Smart Reflector Telescope is one such telescope.

The 130mm aperture is simply huge and really gives you some of the best views available for a tripod-mounted reflector (as opposed to a Dobsonian reflector). 130mm translates to about 5.1” in pure aperture goodness.

That is a lot of light gathering ability that translates to great deep space visuals and awesome contrast.

This is highlighted by the f/5 focal ratio and 307x highest usable magnification. This combo will give you an amazing view of the galaxy and beyond. Nebulas look bright and colorful, nearby star clusters are crisp and recognizable. The whole visual array of this telescope is great.

The images produced are crisp and clear. Jupiter looks great and so does Orion. Everything in the sky pops with this telescope.

The optics are enhanced by a smooth altazimuth mount which allows you fluid and easy control over this large optical tube. You can move the telescope into position without taking your eyes off your phone to make sure you get the perfect alignment.

This is classic Celestron quality in the form of a great reflector telescope. If you want a big aperture telescope that can still travel with you and sit on a tripod then this is a great platform for you.

StarSense vs. The Database 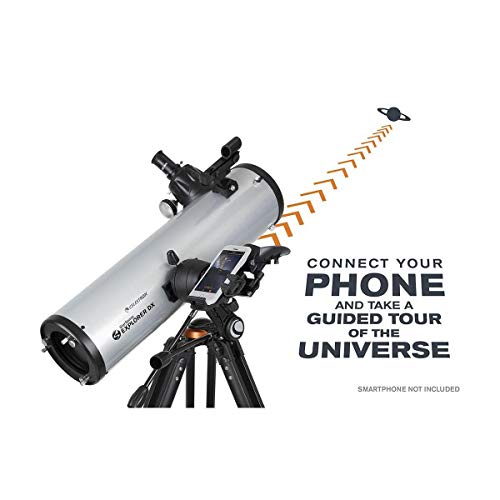 I have reviewed a whole host of NexStar telescopes by Celestron. It was good technology that worked for many years. The first time you see a NexStar telescope automatically find an obscure object in the sky, it is a really awesome experience. It was modern and cool and they really did the computerized telescope well.

Now, they are taking the NexStar database and their technology background and improving on it even further.

The old system used a handheld computer clicker to choose your objects, align the telescope and search the database. Now, that system feels completely out of date. StarSense uses your own cellphone and an app to find objects and process information directly in conjunction with your telescope.

The biggest benefit to this going forward is going to be the ability to easily receive updates. Since Celestron is transitioning to the use of an app, the app can receive regular painful updates straight to your phone that will keep everything up to date for you without you having to do a single thing.

You won’t have to try and fiddle with downloading new software or firmware updates. You won’t have to connect your telescope to your computer via software to receive updates or change the database. The inclusion of an app and a cellphone, something that is so overdone in today’s world, feels fresh here. The app is efficient, looks great, and has a ton of relevant information right at your finger tips. It tells you the general area of the object, when it sets, and the best time to try and view it. If you select it, the app will guide you on how to position the telescope to catch a good image.

The ability to plug your phone straight into your telescope and get a fully curated list of what is visible in the night sky and the best way to view them based on your current location and conditions are awesome.

This upgrades the computerized telescope to the smart telescope. While the old models had awesome programs built in, these telescopes run off an algorithm. The LISA algorithm (Lost in Space Algorithm) helps to run these programs in an intelligent way that is far superior to the old programming.

Marrying this smartphone driven algorithmic technology with the power of a 130mm reflector telescope really gives you a peek into the future. Thanks to Celestron that future is now and the pairing is awesome so far.

As bright as the future looks and as cool as this telescope is, it is not without its own set of modern issues. Celestron has touted that this is the “first telescope that uses your smartphone to analyze the night sky and calculate its position in real time” and it shows.

Like many things in the modern tech world, the advertised performance is not quite as smooth as the actual performance. Once you plug your phone into the included dock that links the two, it is supposed to have a couple of minutes linking up session and then you are ready to go. Right now that process is a little slower than that.

Technology issues aside, this telescope is big. It comes in just under the Dobsonian threshold which is usually right around 6”. The large aperture is great but it also makes for a bulky and fat optical tube that can sit awkwardly on the included tripod.

If you bump or move the tripod at all, it can easily move the telescope out of alignment. This is less frustrating now, due to the handy sky seeking features of the new StarSense app but it can still be an annoyance to have your telescope wobble, bob, and bump. This issue is why Dobsonians were invented but for a large tripod mounted telescope, it does alright. Just expect some movement issues every now and then.

Celestron has also included some extra accessories to get you started with this model. They include two eyepieces, one low powered eyepiece, and one high powered eyepiece for a good visual range. They have also included a red dot finder scope in case you want to use the telescope manually, totally possible with the excellent altazimuth mount that it comes with. This all comes with the tripod and the phone tray.

It is not the most robust accessory list but everything included in this package is high quality and adds value.

The smartphone connection is a nice tray that you can adjust to fit your phone snuggly into the telescope. It sits faceup and displays all of the information from the app right where you need it. Moving and adjusting the telescope is a breeze.

All of this comes included but can also be tweaked and upgraded if you find yourself looking for more diverse accessories down the line.

Right now there are four models available in the StarSense lineup of telescopes but I expect that number to grow. Celestron has masterfully combined their quality telescopes with their innovative technology package to create a glimpse into the future of smart telescopes.

The Celestron StarSense Explorer DX 130AZ Smart Reflector Telescope is a great reflector telescope on its own built on the bones of other great Celestron models and incorporates the smartphone enabled features well. With the new technology and the big aperture, this telescope has the ability to see much more than a manual telescope.

The benefits of the new technology also far outstrip the old database-driven system to incorporate algorithms and real time data to always keep you up to date on what is going on above your head to give you the best viewing experience possible.

If you want a crack at the newest technology from Celestron then this is a great time to jump in and a great model in which to do it if you like reflectors. If you want to hold off for the next upgrade or newest patch to try and avoid some of the new tech glitches, I would totally understand.

The future is coming with smart telescopes and this is a great time to get your hands on one.