Orion comes back to an old favorite with this telescope. The Orion StarBlast 6i IntelliScope Reflector Telescope is an upgrade over their solid standard StarBlast 6 model. The optical tube is the same as the StarBlast 6 but on this telescope, they have added their take on the modern computerized telescope.

For those of you not familiar, the StarBlast 6 was a highly recommended reflector telescope by Orion that ticked all of the boxes. It is a solid telescope with good features and good image quality. We did a separate review of that model as well.

This was my first experience with their IntelliScope package and it is an interesting take on the computerized telescope. I have revied many telescopes using the Celestron and Meade varieties but IntelliScope was new. If you like Orion or are in the market for a solid reflector telescope with a unique set of technological features then this telescope should be on your radar.

In addition to adding in the IntelliScope package, Orion also beefed up the accessory package for their StarBlast 6i. These extras and slight refinements take the already great StarBlast 6 and take it up a notch. 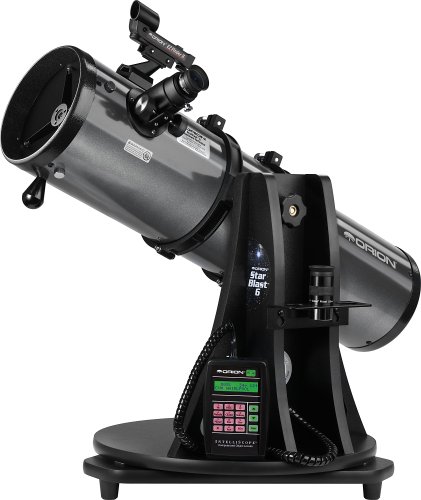 There are very few drawbacks to this all around great telescope.

The 150mm primary aperture really gives this telescope enough power to function at a high level without becoming unwieldy to use. The 6” telescopes fit into a sweet spot where they are big enough to see some great views but small enough that they are still portable. Any bigger and they get harder to move and set up.

With its 6” primary aperture, this telescope has enough light-gathering ability to see some stunning deep space objects. The f/5 focal ratio means that it will excel at gathering some great wide angle views of deep space sights such as colorful nebulas, twinkling star clusters, and majestic galaxies.

If you want to look at some more traditional sights such as the moon or the nearby planets, it is versatile enough to give you those views as well.

Orion has focused on image quality with their StarBlast scopes and it shows in the little upgrades that they add standard to their models. The focusers are made from low thermal expansion borosilicate glass which makes it so changes in temperature do not affect the contour of the focuser leading to better image quality over time. They have also coated their mirrors in order to get as much reflective ability as possible.

All of these features work together to ensure that the most amount of light possible is being gathered by the telescope and that no light goes to waste during the imaging process. Less wasted light and better focused beams leads to clearer and crisper images for the end product.

All of these scientific touches really show in the overall image quality. Images are clear, they display high contrast between the objects and the blackness of space and they impress.

The Orion StarBlast 6i IntelliScope Reflector Telescope works especially well on a dark night. This can be demonstrated by the resolving power which is substantial. The resolving power of this telescope is 0.77arc*sec. This is a phenomenal metric that will work best under the darkest of skies.

What this does is increase contrast and allow the finer details of objects such as planets and binary stars to come through much better.

This feature makes the portability of the telescope that much more important. Since this is a tabletop mount that weighs relatively little for how large the optical tube is, you can easily take it with you. It will be able to be transported in the car to your favorite dark sky locales.
Out on a flat surface, under a dark sky away from the light pollution that plagues urban areas this telescope really has a chance to shine. If you are someone who enjoys going stargazing in certified dark sky locations then this telescope is going to really astound you.

Saying the word IntelliScope out loud makes you realize how intelli-clever of a phrase it is. Luckily, more than just the name is clever when it comes to Orion’s automatic telescope features. IntelliScope offers everything you have come to expect out of a modern telescope tech package and also adds in a few new things of its own to distinguish it from the competition.

Like its peers, IntelliScope will align itself and then locate objects in the sky for you using an included handheld device. You select and object from the database and once the scope is aligned it will locate and track the object for you. They call this piece of technology their Computerized Object Locator.

The difference here is that Computerized Object Locator will not only find an object for you but it can also be used to identify objects as well. I thought this feature was super cool and should be included in every modern telescope.

With the altazimuth mount, you are able to easily search the sky manually for interesting things to look at. Now with the touch of a button, if the telescope is aligned properly and running, it will tell you what the object you are looking at is.

The IDENTIFY feature works best for bright objects that you can focus on by itself. If you give the telescope a starfield to look at it might not give you the most accurate results but it will tell you something that is in the eyepiece. Either way, it is a very nice innovation that I found highly useful and fun to use.

The other computerized upgrade that Orion has added to the StarBlast 6i is the inclusion of multiple different sky tours. They have tailored their tours to show you the sky in different parts of the year. This is very helpful because as the seasons change, so does the sky. This attention to detail ensures that you always have a fresh automated tour to take no matter what time of year it is and gives you something to look forward to as the sky begins to change.

In terms of the database itself, Orion’s is smaller than the competition. IntelliScope’s database only includes 14,000 preloaded celestial objects. That is still a lot of objects and still offers more than enough material to keep you busy. The only thing that makes me wish for a bigger database would be more objects that could be discovered using the identify button.

Overall, IntelliScope is a solid and innovative system that can hold its own against its peers. It is a lot of fun to use and has some unique upgrades that will vastly extend the lifespan of your telescope’s usefulness.

To Tabletop or To Not Tabletop

In a testament to how solid the StarBlast 6i is, the only point of contention surrounding this model is the design choice to put it on a solid wood tabletop base instead of including a traditional tripod. This is purely a personal preference regarding this telescope’s posture but has nothing to do with its optical quality or intelligent AI features.

The solid wood base gives it a weighty and durable seat on which it sits. It does not wobble or vibrate as much as a tripod does. It really compliments the optical tube size and it makes it easy to pick up and transport. There is nothing to break down or set up, just pick up the telescope and go.

The thing is, some people just prefer the traditional tripod over a tabletop flat base. This type of base requires a good, flat place to set it down where you can easily get to the eyepiece. The problem arises with people who do not have such a place to set it.

For as portable as this telescope is, if you want to take it camping or to a park, you might run into an awkward position where you have nowhere comfortable to place it. It sits nicely on a tailgate, picnic table, or deck railing but if you do not have one of those things that are relatively eye level it can be a pain to observe things. There could be a lot of bending over or awkward contorting.

You can still buy a tripod and hook up the optical tube to a traditional base but it would have to be an additional purchase and you would have to disconnect the included base for that to work. It all depends on your preferences.

In an upgrade over its companion model, the Orion StarBlast 6i IntelliScope Reflector Telescope comes with a few better accessory options. This is a welcome change because I dinged the StarBlast 6 for being just a hair light on accessories.

In addition to the standard pair of eyepieces, the eyepiece rack, finderscope, and navigation knob they also added the Computerized Object Locator system and a much appreciated collimation cap.

I always love it when a manufacturer adds a collimation cap to a reflector setup. Most people end up getting one anyway if they are serious about using a reflector long term and getting one straight out of the box is a nice touch.

They are especially useful if you are going to be grabbing and going with your telescope as travel sometimes has the tendency to bump your mirrors out of alignment. Seeing Orion add in the collimation cap really earned a big thumbs up from me.

The second best accessory that this telescope comes with is probably the reflex sight. Usually, the reflex sight is an item that is taken for granted but in this case, it really gets a boost from the IntelliScope identify feature. IntelliScope is going to make you want to do some manual exploring on your own. The identify feature plus the quality altazimuth mount will make this reflex sight get more than average use. Plus it works and looks great.

These extra tweaks to the StarBlast accessory lineup move this accessory setup from below average to above average. I wish more manufacturers would realize that tailoring their accessories just slightly can really up the value of the kit without having to add much cost to the overall telescope. In this case, Orion gets an A for their accessory kit changes on the StarBlast 6i.

You do not need to reinvent the wheel in order to create a meaningful upgrade to an already great product. Orion realized that age-old adage when they set out to upgrade their solid StarBlast 6 into the StarBlast 6i.

The changes they made were small but meaningful and it took an already great product and made into a modern masterpiece. They did not sacrifice accessories, image quality, or accessibility in order to take a great telescope and make it even better.

IntelliScope technology is useful, functional, and innovative. It can stand on its own against the other computerized telescope software on the market right now and adds some unique touches of its own to put it over the edge. The database itself, 14,000 objects, is smaller than some of the others out there but the functionality makes up for this.

If you want a portable, grab and go, reflector with modern technology and thoughtful accessories then this is the telescope for you. The telescope itself is great, the price is fair for all of the stuff you get with it, it has the great image quality and has some thoughtful upgrades and accessories. This telescope has enough to satisfy the beginner, the intermediate, and even the advanced astronomer. The Orion StarBlast 6i IntelliScope Reflector Telescope should not be passed over.