Once you start going down the rabbit hole of large Dobsonian telescopes you begin to realize that there are so many out there of larger and larger proportions. You will also realize that Zhumell seems to be at the forefront of this movement creating some of the most affordable and best large-diameter Dobsonians available.

This tradition continues with the Zhumell Z10 Deluxe Dobsonian Telescope which is another quality, affordable Dobsonian that offers great performance and durability at a price almost anyone can afford.

This telescope offers Dobsonian fans what they crave in an all-inclusive package. However, in their quest to create a gradient line of Dobsonian telescopes it almost feels as this scope occupies a space that was not needed. The Zhumell Z8 is extremely popular and a great large aperture telescope and the Zhumell Z12 is an absolute monster that occupies the highest possible end in terms of size and zoom. It feels like the Z10 is the odd one out. 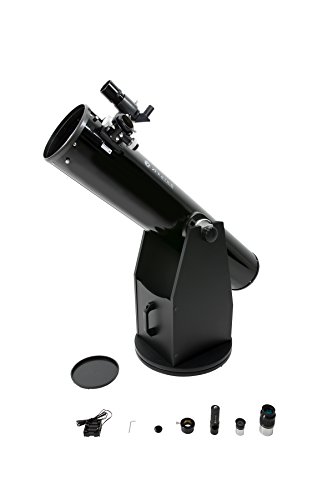 The thing you look for the most in a telescope of any size is visual quality. If a telescope looks good, feels good, smells good but performs poorly then it is nothing more than a home prop used for decoration. Telescopes of this size and price are expected to perform at a certain level and this one does.

The large 10” diameter primary mirrors give you a decent chunk of power and visual quality. With a focal ratio of f/5 and a highest theoretical magnification of 500x this telescope is designed to trawl deep space for interesting sights. Living up the moniker of a light bucket, this telescope offers an amazing light collection capability.

Zhumell says that the Z10 has a whopping 56% increase in light grasp compared to the next smallest model. This telescope is specifically designed to collect as much light as possible, process it and give you a clear visual image of distant objects.

This will make seeing faraway galaxies or nebulas easier than ever and opens up the potential to see more of these deep space sights than ever before. Users have praised its ability to see bright and vibrant nebulas during dark nights. These are more advanced and, dare I say, nebulous sights than the traditional nearby space rocks that many telescopes are geared towards.

When it comes to large reflectors geared towards deep space this scope checks all of the boxes as to what you would be looking for.

Functional and Innovative Base

The optical tube on this telescope is massive. It is 49” in length and weighs about fifty pounds on its own. Throw in the 10” diameter and you have a hulking piece of equipment to manage. This was for things like this that the Dobsonian design was invented for.

The included sturdy wood base keeps the optical tube secured, stable and functional. Without the Dobsonian base, this telescope would not be possible for the layperson. A standard tripod would not be able to handle such a large telescope.

Even so, this base not only supports the telescope but makes using it a breeze. The included altazimuth mount has specially designed bearings to make moving this telescope across the sky a very easy and comfortable experience. The movement is smooth and fluid and soon you’ll forget you are manipulating a 50lbs piece of technology.

In addition to the reinforced bearings that make movement easy, Zhumell has also included a manual clutch system that allows you to easily lock your mount in place to focus on one part of the sky without having to worry about the telescope drifting or getting bumped out of alignment.

The high tension manual clutches will allow you to find a particularly interesting piece of sky or a choice view of a nebula and keep it in focus for longer. This extends the lifetime of each viewing session which is a great addition to include with the base.

So this is all-important because…

When you are looking so far away, the smallest movement to the optical tube can move your whole field of view so the manual clutches make it so that this happens as infrequently as possible.

They could have just shipped the standard Dobsonian base but instead Zhumell, like usual, goes above and beyond with the high strength bearings and inclusion of an innovative locking system all built into the base. This raises the most mundane part of the telescope to a new and useful level.

I love opening up the accessory box with a new telescope. Accessories and addons can really flesh out any telescope and they are a ton of fun to try out. Some telescopes just throw in some cheap junk to fill up their specification page but Zhumell takes their accessories seriously. From their smallest cheapest telescopes up to their largest, they always take the time to add quality, useful accessories that only add to their telescope’s functionality.

The Zhumell Z10 Deluxe Dobsonian Telescope is no different in this respect. The extras really justify putting Deluxe in the name. This kit includes two eyepieces, a laser collimator, a cooling fan, a Crayford focuser and a red dot finderscope which also comes with a right-angle viewer. These accessories are all immediately useful and add a lot.

The laser collimator is a great touch that allows you to collimate the mirrors on your own right from day one. This is great because finding a quality laser collimator that will work well with this telescope could be a pain otherwise.

The mirrors on this telescope are so large that they collect enough light to actually heat up. As the reflective surface begins to heat, it will warp ever so slightly. Don’t panic, all matter will warp with increased heat. These mirrors are so precisely made that the slightest bit of heat over time will make it warp just enough to bring some images out of focus. If this sounds like a drag, don’t worry, that is what the included cooling fan is for.

So whats this fan for?

If you are someone who gets lost staring at the sky for hours you are going to appreciate this fan because it will allow you to have long viewing sessions without worrying about heating the mirrors too much. The fan will bring the temperature down quickly or keep it cool long enough to keep that galaxy in focus for a while.

On top of that, they include the standard eyepieces, finderscope and right-angle viewer to flesh out your viewing options right out of the box. You will have two base magnifications to work from as well as a red dot sight and focuser so you can start viewing as soon as you set it up. The only thing this kit does not include standard is a Barlow lens but when you have the kind of power this telescope does, you don’t need a gimmicky Barlow scope to enhance your magnification.

As great as this telescope is, there are a few prominent drawbacks that I found with it that I felt compelled to mention.

A lot of eager astronomers rush out and buy the biggest and best reflectors and take them home expecting to get the advertised views of the galaxy only to discover that they live in an area with moderate to severe light pollution. This isn’t usually an issue with smaller, more focused telescopes but a telescope that is made to collect light can be hampered by the existence of light pollution above.

The same capabilities that allow this telescope to see so far are also going to collect up the pollution and clutter your possible views of the galaxy. The telescope will still be usable in areas with some light pollution but its higher-end capabilities will be supremely diminished which will cut down on the usefulness of getting this model. It would be a shame to spend extra to get the 10” aperture only to find out that the nearby metropolis is hampering your ability to use it to the fullest.

Even things like being near an airport or under a flight path can really hamper the usability of such a powerful telescope. It will only perform at its advertised best under ideal conditions. While the unideal conditions will still give you some great views it will not be the max power that you are looking for.

Normally, I would say use it at home and then take it out to dark sky locations every once in a while if those conditions don’t occur naturally at home but this thing is so darned big and heavy that I would not advise moving it often.

These things are not deal-breakers by any means but they are things that potential buyers need to keep in mind before jumping into the deep end with one of these models.

Hard To Justify This Size

Zhumell has done an excellent job with their Zhumell Z10 Deluxe Dobsonian Telescope and the entire line of Z model large aperture Dobsonians. Almost too good. Their combination of quality and affordability is amazing but it has left me wondering if the Z10 is needed.

The Z8 is a fantastic telescope that offers the average user all of the power and bells and whistles necessary to have their very own large aperture Dobsonian. It covers all of the bases for an extremely affordable price and could even be used by a relative beginner. It doesn’t need super dark skies to use and performs almost identical to the Z10 by the average user. Especially in an area with any amount of light pollution.

If you are not an average user and you count yourself among the more experienced or advanced astronomer then you are going to, most likely, want to jump straight to the Z12. The price difference is small enough that if you are the person looking for the absolute biggest and best when it comes to Dobsonians you are going to want the Z12 and not the Z10.

So whos this telescope for?

The performance and quality of this telescope are not in doubt but it occupies a sort of no-man’s land. If you are just starting out in the world of large diameter reflectors there is no reason you would want to skip the accessible and affordable Z8 for the Z10 and if you want to take that next step there is very little reason not to pony up the extra cash to go straight to the Zhumell Z12 and get all of the benefits of the Z10 plus some.

I guess if your budget calls for a limit that includes the Z10 but not the Z12 then this would work but I can’t see that being a very large part of the potential buyers.

While I think the entire line of Z telescopes by Zhumell is amazing, I would suggest getting the Z8 or Z12 before getting the Z10.

Overall, the quality and capability of this telescope are great. It looks great, feels great and performs as advertised. For anyone looking for an excellent, large-aperture Dobsonian then this one should definitely be on your radar.

However, I can’t help but feel that the Z8 and Z12 models offer just a little bit more in either direction in terms of capability, price, and accessibility. The potential market for this telescope feels very small to me but if you fall into the category of people who want the middle model of this line then you won’t be disappointed.

In a line of telescopes that is already among the best, being the worst of the best isn’t a bad spot to be in, there are just better options out there from the same people at Zhumell that can offer more.