In the mid-1960s, the Dobsonian telescope was designed and marketed as a way to increase the size of backyard telescopes for the layman and hobbyist. The Zhumell Z12 Deluxe Dobsonian Telescope is the culmination and the ultimate apex of the Dobsonian design. Dobsonians were developed so that people like you could own a telescope like this.

The Zhumell Z12 is an absolute behemoth offering one of the largest telescopes available to the average person. It has a 12” primary aperture, a full foot in diameter, that is three or four times larger than the average telescope size. If you want to own one of the largest telescopes ever made for public consumption then the Zhumell Z12 Deluxe Dobsonian Telescope is a scope that you need to pay attention to.

With specs like these, you might expect this telescope to break the bank but that is not the case. This telescope kit, from all of the major online retailers, comes in at less than a thousand dollars across the board. The value of the specification ratio of this kit is out of this world. 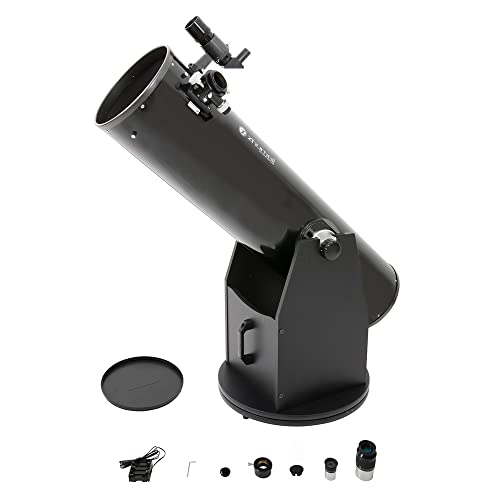 If you are someone who loves reading specification tables and seeing the numbers and capabilities of telescopes and more, then this one is going to really please you. The attributes of the Zhumell Z12 Deluxe Dobsonian Telescope are simply amazing. They are even better to use as they are to read and sink your teeth into.

The diameter of the aperture is one foot, the focal length is 1500mm or five feet long. That makes the barrel of this thing truly massive. This gives it an unheralded light gathering ability. This telescope can gather more light than any other telescope on the market, hands down.

If you want your telescopes to see farthest or pick up on the faintest sources of light in the galaxy, then this is the telescope for you. Besides being the size of an adolescent human, here are some more specs to really flesh this thing out.

It weighs 75lbs completely assembled. There are some solid telescopes on the market that have an assembled weight of less than 10lbs for comparison.

It has a focal ratio of f/4.95 which is extremely low. This is due to its comparatively long focal length of five feet.

The lowest useful magnification is 43x which is the optimal magnification of some smaller, lower-end telescopes. That is where this thing starts. The very smallest it zoom level it will function at any level is 43x.

So how does it stack up?

All of that adds up to a highest possible magnification of 600x and the ability to see distant galaxies and star clusters that are way, way out beyond the Milky Way. A true monster of a telescope.

Optics and Who It Is For

These specs mean that this telescope is going to give extremely clear views of the very distant universe. The image quality, if tuned correctly, is going to be extremely crisp and give you views that you won’t be able to get with any other telescope.

With the massive size, high lowest magnification level and low focal ratio this telescope are not going to do some standard things, like look at the moon, very well. It is specifically designed to sit and stare into deep space, not near space.

It’s stated intended use is to look at distant galaxies according to a leading telescope site. Distant galaxies. That means it is not even best intended to look within our own galaxy. That kind of power also comes with a bit of a caveat.

As cool as these specs are and as awe-inspiring as the size of this scope is, it is not going to be for everyone. This telescope is going to be the end of the road for the enthusiast who has continued to get larger and larger reflectors over the years as they’ve honed their skills and refined their interests.

Dobsonians already fill a sort of niche for those astronomers who love the deep space ability of reflectors who want to take that ability as far as they can in a residential setting. These telescopes are fondly referred to as light buckets by their users who have set them up to soak up as much light from the cosmos as possible.

A look at the size

If that is not you, then you probably don’t need a Dobsonian much less the largest Dobsonian out there.

That being said, if light buckets are your thing and you have graduated on to the largest sizes and yearn for more deep space then this could be the last telescope you ever need to buy.

It can show you the Andromeda as never before, you can fill your eyes with the structures and sights of distant galaxies and star clusters usually only seen on a computer screen by most people. See satellite galaxies around larger ones. View the arms of nearby spiral galaxies or the hazy glow of cluster galaxies.

If you want to peer deep into space and back in time, not because you know what’s out there but because you don’t know what’s out there this telescope is for you. A lot of astronomers find the name of some object, Perseus, Polaris, Saturn, The Crab Nebula and then they set out to find it and look at it. The stuff you’ll be seeing with this scope does not have colloquial names in a lot of cases, they’re going to be categorized by strings of letters and numbers.

You won’t know what you’ll be looking at, at first and that’s okay. That’s part of the adventure and the fun of this telescope. You are going to look far beyond what the average astronomer sees into the realm where only the scientists frequent.

In addition to creating one of the biggest and best Dobsonians ever, Zhumell has not skipped out on offering their usual smorgasbord of accessories to add even more value to this kit. Some manufacturers would consider skimping on accessories and making you buy large specialized pieces for an extra money but not Zhumell. They give you everything you need to operate this telescope comfortably and efficiently right out of the box.

The accessories include two eyepieces, a laser collimator, an 8×50 finderscope, a Crayford focuser, a mirror cooling fan and the sturdy Dobsonian base. Many telescopes do not include a full suite of accessories like this one does. It offers everything you need to get started.

The two biggest additions here are the laser collimator and the mirror cooling fan. This shows that they know some of the gripes that might arise with this kind of telescope and have moved to counteract them before the user encounters them and gets frustrated.

Collimating anything to worry about?

Collimating mirrors of this size can be a challenge for even the most experienced astronomers and the inclusion of the laser collimator means that Zhumell is aware of this. This is an invaluable tool that will keep your mirrors in alignment without having to scramble to find one on your own.

Most people won’t know that the mirrors in these telescopes are extremely fine and thin. In many reflectors, this doesn’t mean much for its performance but it makes them very susceptible to temperature changes. This telescope is so large that the amount of light it is taking in is enough to heat the mirrors enough to get them to move.

Material expands and changes under heat and your telescope mirrors are no different. Zhumellsaw this issue and added a cooling fan to keep your mirrors at a useable temperature for longer and allows it to come back to baseline quicker after heating. This means more time viewing and less time frustrated when the mirrors are too hot to give a clear image.

The base is extremely durable, sturdy and keeps this massive telescope in place without issue. Not only does it secure and display the optical tube effectively it also makes it a breeze to use. The smooth altazimuth mount moves this telescope flawlessly due to Zhumell’s beefed-up bearing system they built into the Dobsonian base. This makes the massive telescope a smooth and easy tool to wield.

While this telescope, from a technical and astronomy standpoint, is a marvel it does have a couple of limitations that are derived from its design.

The chief limitation of this telescope is going to be the need for dark skies. Since the light gathering ability is so great, it needs very dark skies to get the maximum performance out of it. If you are in a densely populated area with a lot of light pollution then the smorgasbord is going to simply soak up a lot of that light pollution and give you fuzzy images or simply not be able to see as far as you could with dark skies.

This ties in with the other limitation of this scope which is its massive size. If you do not live in an area with naturally dark skies, you probably won’t be taking this telescope along with you to find them. The size and weight of this set up mean it is probably going to stay put once it’s together for the average user. Unlike some telescopes, this one is not designed to pick up and go.

So is there an alternative for me?

This means if you live in the suburbs or in a city with a lot of light, you are going to waste your money on a telescope like this because you won’t be able to effectively put it through its paces without truly dark skies. You could get away with a smaller telescope, even a smaller Dobsonian, and get the same results if you cannot escape the light pollution.

Zhumell makes smaller Z10 and Z8 versions of this model that might suit people better who do not need the biggest telescope in the line.

If you have dark skies, a safe spot to set this telescope up and have a passion for deep space sights then this telescope can be one of the best ever.

For the person who wants the biggest and the best and also has the know-how and conditions to use it properly, this is a telescope that is truly unmatched by anything else out there. It is massive, crisp, powerful, and affordable. This is a combination that sounds too good to be true but in a rare case, this one isn’t.

If you have the expertise, passion, and the dark skies required to really push this telescope it will show you things you never imagined you could see from your backyard. It has the power, versatility, and quality to satisfy your deep space stargazing needs for years or decades to come. Zhumell pushed the Dobsonian design to its limits and in doing so have crafted a masterpiece in telescope design and engineering.

We think this telescope is one of the Best Dobsonian telescopes on the market.